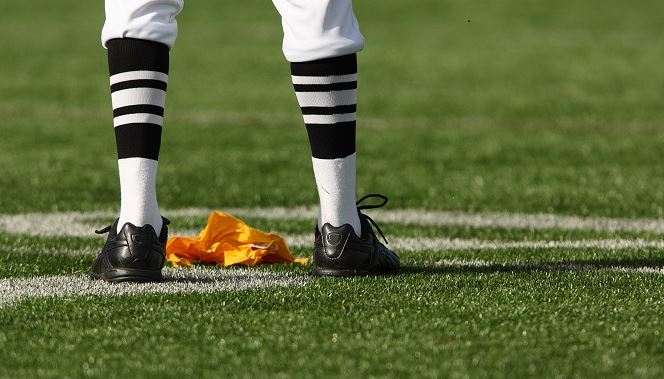 First, apologies for the break. I was taken down by spring allergies/my annual sinus infection, then having a great time with many of you at ACRL, then recovering from both of those things. But back at it! Last year at this time, I wrote about the Masters. If that had not happened, today’s post would feature a clip of Jack, easily sinking his predicted hole in one. Man, he’s good. Or I could have written about the horrible tornadoes which struck Illinois last night. But I had already done that too. Finding a research topic can be tough, especially when all the obvious choices are taken. (Sound familiar?)

Today I chose to write about Sarah Thomas; there are so many great things about this story. Sarah is a bit of a trail-blazer in the “girls in football” arena. She was the first woman to ref a Big 10 game, the first to ref a college bowl game, and now, the first to be hired as a full time ref for the NFL. (Source) I also appreciate that Raven’s coach John Harbaugh has already voiced confirmation of her qualifications and did not say anything resembling “for a woman”. (Full disclosure – while not a Raven’s fan per se, I was already a huge John Harbaugh fan.) I’m hopeful this will help stave off some of the ridiculous comments the NBA has been suffering through.

This article highlights something so incredibly frustrating I was hesitant to include it. Not because it’s not entirely appropriate or because I couldn’t find supporting material, but because I was afraid I would get off on a tangent and ruin my entire post with “and another thing!”. So let’s not do that then. The headline says it all: There are more men named John than women running large companies. Now, is this just a U.S. problem? No. (Interesting, John and Davids also lead more in the UK, but Peter’ take it in Australia. And by a lot. Everywhere.) As a woman, its frustrating. As a living, breathing, contributing member of society, it’s embarrassing and, quite frankly, stupid. (See aforementioned fear of tangent.) With sections on understanding the gender gap and women in the workplace among its 1000 entries, readers can find some context on the role of women at work.

What do the roles women play in literature say about the way society views women? What if the character is a minority? What if the writer is a woman? What influence does the time in which the work is written have on the quality of the character? How does a 1930s flapper related to a 2006 eReader version of a steamy romance novel vixen? Take a look at these concepts, and many more, in this interesting title.

To be perfectly clear – the media is fair, and is not fair, to just about everyone, in different and equally frustrating ways. The astronaut who is asked about her hair. The new father who is not asked about balancing family and work. The ball-busting female CEO before congress. The would-be senator who cried during his concession speech. Why are there so few women heading fashion companies and how have they made headway in the technology and food industries? Why do I assume those situations are weird? Explore how media can help shape “what normal looks like” in this interesting title.

My first introduction to the concept of suffrage was the (kind of crazy) mother in Mary Poppins, and her “cast off the shackles!” song. As an adult, I know the story is much richer, longer, and perhaps sadder. Users of this title will find a much more complete accounting of this Women’s liberation movement of the 1960s, including historical and contemporary events, personal narratives, and more with this title.

Sally Ride. Nancy Pelosi. Danica Patrick. (Harriet Hunt. Babe. Zaharias. Katherine Graham. Claressa Shields. Mary Barra. Mo’ne Davis. Sarah Thomas.) Each of these remarkable women did something for the first time. Whether it was rocketing into outer space, playing professional golf, or running a Fortune 500 company, these remarkable ladies were the first to do it. Focusing on women’s status from 2000, this a-to-z reference provides insight into women, women’s issues, and more within the contemporary world.