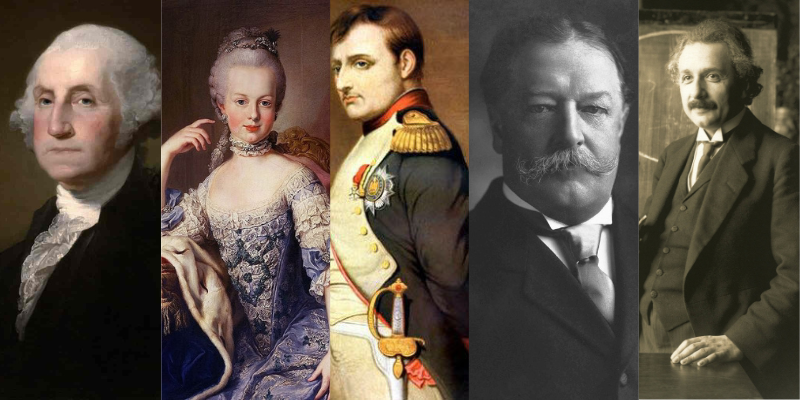 Although history is reliant on facts, many misconceptions exist about well-known historical figures.

Did George Washington have wooden teeth? Did Einstein fail math? As historians look at the past with a critical eye, they’ve found proof to debunk common myths that evolved over time and are now widely accepted.

Myths in history remind us of the importance of finding credible information to ensure news and stories are accurate. Help your students find factual content about historical figures and other topics in biographies, magazine articles, and more with Gale In Context resources.

Here are a few popular figures whose histories are woven with fictional details:

Myth: George Washington, the first president of the United States, had wooden teeth.

Fact: When he took the oath of office, George Washington had just one original tooth in his mouth. Perhaps even more disturbing than having wooden teeth—Washington wore dentures made with teeth from animals and humans!

Intrigued? Get more details in Gale In Context: High School.

Myth: In response to starving Parisians who had no bread, Marie Antoinette is famously remembered for saying, “Let them eat cake.”

Read more about the life and myths of Marie Antoinette in Gale In Context: World History.

Myth: As a military leader and emperor of below-average height, Napoleon Bonaparte is the namesake and best example of the Napoleon complex.

Learn more about the Napoleon complex and its polarizing history sparked from tales of Napoleon Bonaparte in Gale In Context: World History.

Myth: William Howard Taft, the 27th U.S. president, once got stuck in the White House bathtub.

Fact: There’s no proof this ever happened—in fact, the myth did not circulate until around 20 years after Taft’s term ended. However, Taft is known to have bathed in a supersized tub in the White House that was seven feet long.

Myth: Albert Einstein was a lousy student who failed math.

Fact: The theoretical physicist did fine in math, but he did flunk the entrance exam to the Zurich Polytechnic Institute on his first try at age 16. The exam was given in French, which Einstein wasn’t fluent in, and records show he passed the math section but failed the language, botany, and zoology sections.

Want to debunk more myths with your students? Use Gale In Context resources to find credible, age-appropriate facts in an easy-to-use platform.

Not a Gale In Context subscriber? Reach out to your education consultant to get more details today.